Shy and nocturnal but an apex predator relying on its keen sight and hearing when hunting, the Thylacine was known mostly to appear in the dusky twilight hours. A wary but inquisitive pursuit predator shaped by its native environment – rich soils, pristine air, pure rainfall, the woodlands and the coastal brush of Tasmania. The last known Thylacine is believed to have died in 1936 and despite being declared extinct there have been many unconfirmed sightings, even as late as February 2019 - but no conclusive evidence of this elusive creature, the Tasmanian Tiger.

May The Last Thylacine be the first of many...

The home of TLT is the gateway to Northern Tasmania - an island of mysterious purity, bursting with natural beauty and renowned for premium produce. We have exquisite resources at our fingertips, ambition in our eyes, the taste for adventure and we are forever searching. We search for the story behind the land, the potential at hand and we find the legacy, the mystery and the wonder of The Last Thylacine.

Our whisky starts with two undeniably Tasmanian components – 100% locally grown and malted barley and the purest water from our longest river, the South Esk. It's brewed, fermented and twice distilled by hand in small makes in the iconic Hangar 17 at the Launceston Distillery. The refined distilling process pays homage to the true style of Scottish Whisky in this hand crafted Tasmanian single malt whisky.

The Tasmanian made copper stills are clad in Tasmanian oak and ever under the watchful eye of our skilled distillers. Re-purposed staves are charred by a local cooper to open up the wood and allow for integration of flavour. The subsequent carbon absorbs any unwanted characteristics, leaving only the smoothest spice and richness to develop over the 27.5 months our whisky spends in barrel. The barrel size, type and maturation periods are costly labour-intensive options, but when crafting a whisky to reflect the purity and quality of our natural environment as well as vintage specific characteristics, these elements are key in capturing the true essence of our Thylacine.

Our distiller is Chris Condon, the face of the Launceston Distillery in Hangar 17, Tasmania’s oldest commercial aviation building. With a wealth of experience in the iconic Boags Brewery, and the founding distiller of Nant Distillery, Chris follows his heritage and the tradition of Scottish Malt Whisky, in the Tasmanian Single Malt Whisky he crafts in his hometown of Launceston.

Batches are approximately 100L resulting in approximately 200 bottles. Smaller 20 litre casks result in faster maturation due to the surface area contact of the barrel to the whisky. These barrels under other standards could be used for up to 4 times, but we prefer to use only twice for the richness of flavour that is imparted.

A Tasmanian Single Malt Whisky must be matured in barrel for at least 2 years and we monitor closely to ensure just the right moment for bottling after this time, when our skilled distiller deems the whisky to be well rounded with balanced flavours. The process of maturation in a barrel results in some whisky being lost to evaporation due to the oxygen coming and going -  the breathing of the porous French oak, intrinsic to the development of flavour and integration. This is called the “angels share”. Our whisky was barreled with an alcohol level of 63.4%, and after the angels share, the level dropped to 61%. When finished for bottle we settle on a level of 45%. This level retains intense character that is associated with a premium small batch craft whisky.

This process of patience and passion builds to a seemingly sudden moment where there is nowhere for our Thylacine to hide. The creature reveals itself in the moments it takes to appreciate a flavour, like the glimpse of the iconic striped back appearing in the dense Tasmanian scrub.

The Last Thylacine is a creature of untamed complexity placing the skill of the distiller and the purity of the ingredients on full display if even for just a moment in time. You have sighted your Thylacine, but the only evidence that remains is the smooth flavour, unique Tasmanian characteristics and a lingering finish forever imprinted on your memory. 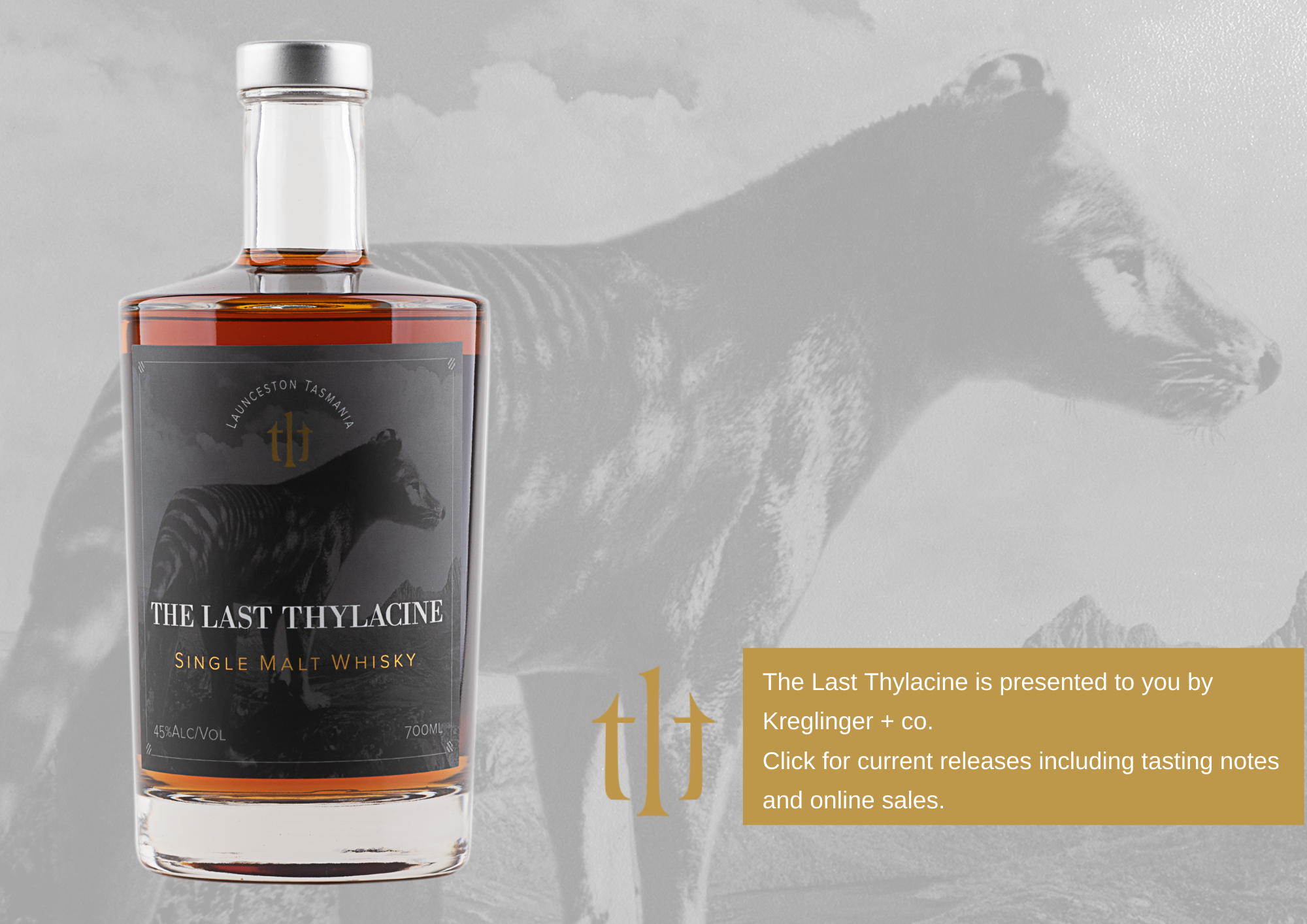